In 2002 the robust jaw of an adult male human, Oase-1, was found in Peștera cu Oase (‘the cave with bones’) in southwestern Romania. It was dated to 38-42 ka, which falls among the oldest European early Upper Paleolithic human remains, together with Grotta del Cavallo (43-45 ka), Kent’s Cavern 4 in UK (41-44 ka), Mladeč in Czech Republic (34 ka), Vogelherd in Germany (32-33 ka)… and overlaps the late surviving neandertals.

The morphology of the Oase-1 mandible presents a very interesting hybrid combination of derived and archaic traits:

Within the range of early modern humans in the Late Pleistocene:

Out of the modern human range: 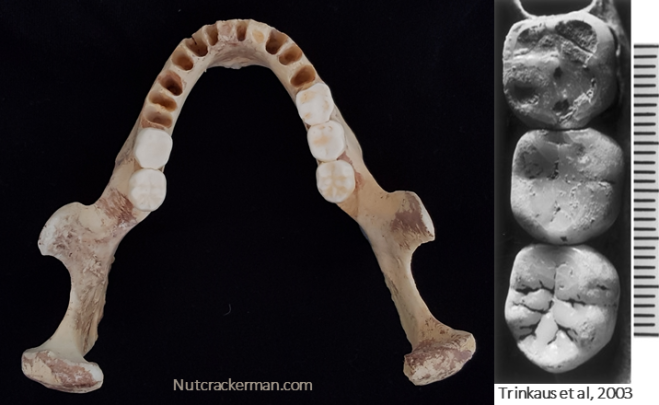 Fortunately, human DNA material could be recovered from Oase-1 and presented in 2015 with the following finds:

Together with other fossils recovered from the site, Oase-1 is an extraordinary case to illustrate the transition from neandertals to early modern humans in Western Europe, and the complex population dynamics of modern human dispersal into Europe.

These dynamics are the result of the earlier emergence of modern humans from Africa, their dispersal over tens of millennia throughout Eurasia, and the geographically and temporally variable mixture of those dispersing populations with other regional human groups, including the neandertals and other human groups (species?) that became extinct.