Last January, Lee Berger challenged me on Twitter to add Homo naledi to a picture I posted, which came from a paper by Aurélien Mounier & Marta Mirazón (2019). That was an image of five hominins from the African Late Middle Pleistocene. I found it interesting, so after getting their permission to modify the picture, here is the result! Now, I wanted to briefly describe the six specimens, and reflect on their place in the search for the roots of the human lineage.

From left to right, top to bottom: 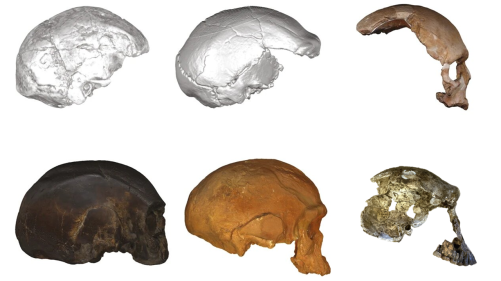 This cranium is quite different from the other one found at the same location: Omo I was thought to be the earliest Homo sapiens fossil until the reassessment of the Jebel Irhoud materials in 2017, which predated that record. However, Omo II is less rounded, longer and narrower than Omo I. Actually, like occurs in Jebel Irhoud, many features are outside the variation of modern humans while others are fully modern. This mosaic makes really difficult to classify this cranium and shows the variability of the African Middle Pleistocene human groups, among which many of them would have probably become extinct.

Although it is large and quite modern, again we can check some archaic features like a long and oval shape with a low vault, sloping and relatively flattened frontal bone, a significant and continuous supraorbital torus, and very thick bones, combined with a gracile face and a rounded occipital region.

This cranium shows a modern, high frontal bone although its roundness attenuates laterally and has a sagittal depression. It also shows a large supraorbital development, and the face is broad. Its discoverer Thomas F. Dreyer assigned it to a new species Homo helmei (1935), to distinguish it from Homo sapiens and Homo heidelbergensis.

This is a large skull with modern shape in its upper and rear view, very slight supraorbital development and absent transverse occipital torus. But it also has some primitive features: flattened and elongated appearance, with maximum width in lower position and very robust, wide face.

The human remains of Jebel Irhoud are considered the earliest representatives of our species since their reassessment in 2017. This proposal was based on the modernity of some features of the face (gracile checkbones and lack of projection), the morphology of the dentition and the jaw (despite its large size), although combined with other primitive features, such as the elongated and low skull shape and the supraorbital arches.

The skull of Homo naledi looks primitive, with features that resemble to those in Homo habilis, suggesting a very deep origin of its lineage. The cranial capacity is 610 cc. The teeth are also primitive in the increasing size towards the back of the tooth row, but modern in their small size and structure, as in the gracile mandible. The most modern features of Homo naledi are found in the post cranial skeleton. 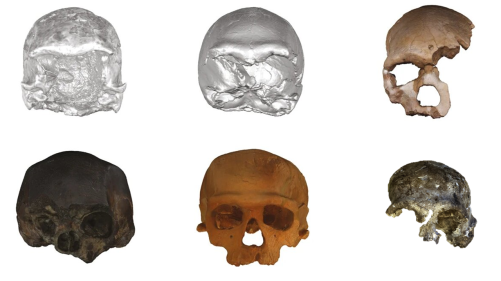 What is archaic Homo sapiens?

Except for the Homo naledi skull, all the rest could be considered representatives of an archaic Homo sapiens lineage. What are the species representing the archaic humans in Africa, apart from Homo naledi, if not Homo heidelbergensis? Given that Homo helmei is usually abandoned, we may use Homo rhodesiensis – or possibly Homo sapiens itself! But first, the priority must be to clarify what the term ‘archaic’ means here.

The barrier between the so-called anatomically modern humans and the term archaic Homo sapiens is not clear, because of the poor record of fossils and the great morphological variability between them. It is difficult to geographically and temporally locate the origin of the ancestral populations of modern humans, and also to understand the evolution of their morphology. In my interview to Chris Stringer in 2017, he explains:

In 2019, Mounier & Mirazón Lahr built a model to estimate the morphology of a virtual skull representing the ‘first modern human’, the last common ancestor of today’s humans (this is the study with the picture from where this post begins). They propose a complex evolutionary process of Homo sapiens composed of several phases, although many did not contribute to the genetic and phenotypic structure of current human populations:

Un pensamiento en “Searching for the roots of our lineage: 6 African skulls from the Late Middle Pleistocene”