The cranium of Steinheim, Germany, is probably the most strange mix of hominin characteristics in the European Middle Pleistocene.

It is assigned by many authors to Homo heidelbergensis, but this specimen actually supports the hypothesis against the definition of Homo heidelbergensis as a single umbrella of multiple fossils from a wide range of geographies: Mauer, Vértesszőllős, Bilzingsleben, Arago, Petralona, Bodo, Broken Hill, Dali and other Middle Pleistocene findings. These are not assigned to Homo erectus, but we do not have a full understanding of the migration flows that clearly could justify assigning all of them to just one species. Some proposals consider that Neandertals and H. sapiens may have had another chronological preceding species different from H. heidelbergensis. Steinheim is sometimes described as an early Neandertal, together with other European Middle Pleistocene specimens such as the Sima de los huesos population.

The Steinheim cranium is gracile and seems to be a female of 250-350 ka. Its size is smaller and its cranial features are less robust in comparison to other European remains like Arago XXI or Petralona 1. Actually the only clear Neandertal feature is the occipital bun, while many other features anticipates Homo sapiens: for example the presence of canine fossa, and the face which is longer, smaller and flatter than the Neandertal face. 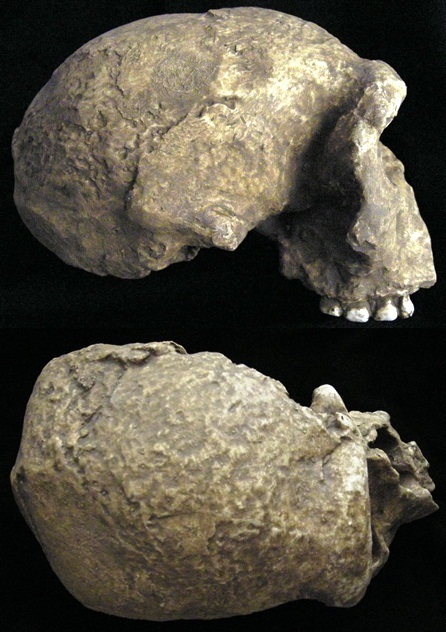 It retains some primitive characters though, intermediate between Homo erectus and H. sapiens, such as the heavy browridges and the small cranial capacity of 1100 cc, similar to Cranium 5 from the Sima de los Huesos in Atapuerca. The quite spherical braincase is similar in shape to that of Homo sapiens.