An ancient population of Homo sapiens migrated 100 KYA from Africa into Asia. In the Near East they met a population of neandertals, probably around the Persian Gulf, the Arabian Peninsula or the eastern end of the Mediterranean Sea in Western Asia. Then an introgression occurred of Homo sapiens into Homo neanderthalensis.

This means that probably those hybrid neandertals+sapiens from 100 KYA migrated to East Asia. Then a climate change produced an expansion of the Caspian Sea, which probably prevented further interchange with those other neandertal populations going West towards Europe.

At the same time, that ancient Homo sapiens people who left Africa 100 KYA are thought to be in the roots of all the African modern humans populations. They are probably related with the 90 Ka populations from the Skhul and Qafzeh caves in Israel, as well as with the 47 human teeth dated to 80-120 Ka found in a limestone cave system in Daoxian, China.

In later migrations from Africa into Asia between 60-40 KYA Homo sapiens successfully began colonizing the world. They interbred with neandertals probably again in western Asia. The consequence is the 1 to 3% neandertal trace that is kept in all modern humans’ DNA except in the Sub-Saharan peoples. For example, I have 1.2% neandertal genome according to the Genographic Project by National Geographic. 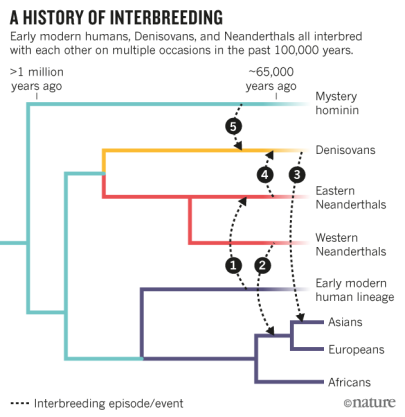 Finally, we have also evidence of another hybridization in East Europe 40-45 KYA. The Oase-1 mandible from Romania is one of the oldest European Homo sapiens specimens. Its DNA has an amazing 6 to 9% of neandertal genome. This means he had a neandertal ancestor only 4 to 6 generations before him.

And surely many others…

Apart from the paleogenetic evidences, there are some other clues of possible encounters between the two species in many sites in Europe. This is inferred from the findings of culture remains from both sapiens and neandertal evidence at the same sediment layers.

7 pensamientos en “How many interbreeding events between neandertals & sapiens?” 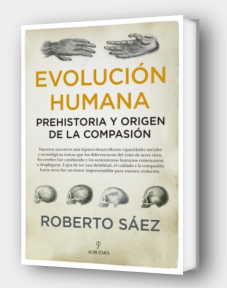