The following three iconic hominins were found on October 21st!

It was found in the sediments by the Neckar river near Mauer, Germany, and dated to 500-600 Ka. The fossil was so different from other Homo specimens that a new species was defined for it: Homo heidelbergensis. This mandible remained the oldest hominin known in Europe for almost a century, until the 1990s.

It combines primitive features (large size, robust wide mandibular body, thick enamel, broad ramus) and modern features (molars are smaller than Homo erectus but some similar to modern humans). It is relatively short, the symphysis slopes down and back from the teeth and lacks a projecting chin.

Found at the Drimolen cave, South Africa, it is a very complete australopithecine skull dated to 1.95-2.04 Ma. The face only lacks the left zygomatic arch, some fragments of the left orbit and the nasal bones.

This is a collection of 13 fossils dated to 6 Ma found in Tugen Hills, northern Kenya. The three femoral fragments are similar to the Australopithecus afarensis femur and show consistency with upright bipedalism: the angle of the femur and the grooves where muscles and ligaments are attached, suggest that the specimen was a biped on the ground, whereas the humerus and phalanx show some arboreal adaptation. The postcranial bones show a larger body than those of Australopithecus afarensis.

The structures of the teeth (elongated molars, smaller than Lucy’s) and the thickened molar enamel are hominin-like. However the front teeth, jaw, humerus and finger bone are more ape-like, making some scholars support that the Millenium Man remains could be a terminal Miocene/early Pliocene ape. 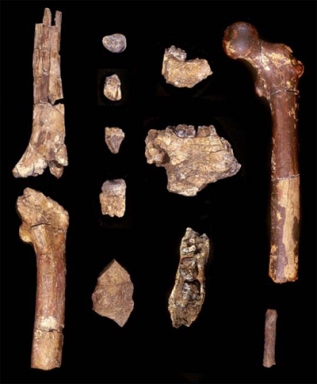